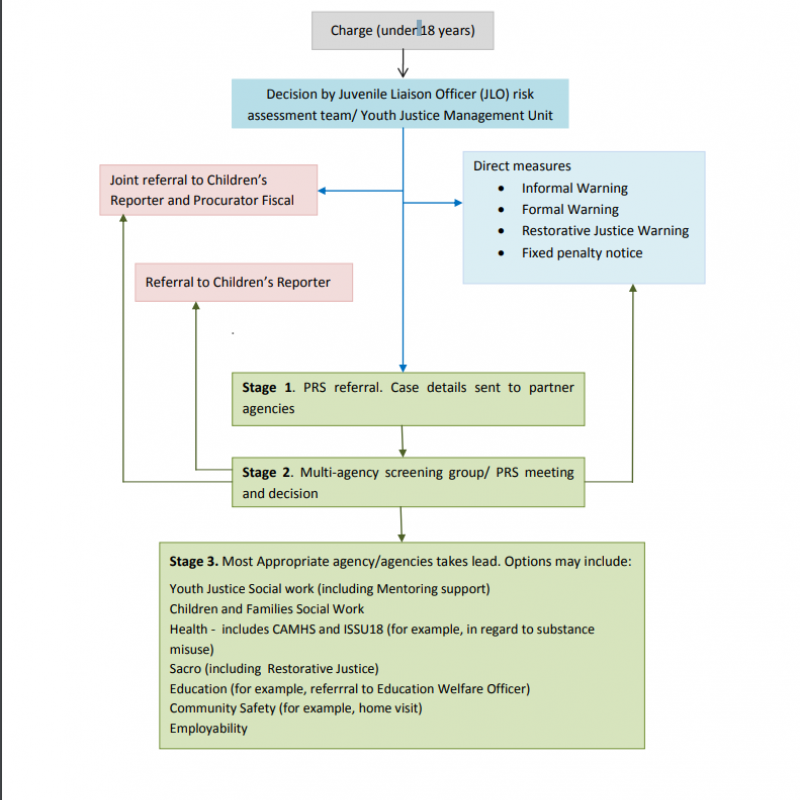 Based on research including the Edinburgh Study of Youth Transitions and Crime, the Scottish government in 2010 introduced its WSA to young people who have offended. The WSA was a new way for all agencies to work together to keep young people up to the age of 18 out of the criminal justice process, avoid labelling and use early intervention as quickly as possible, it is a voluntary programme that local authorities can choose to incorporate into their youth justice strategy. The evidence base on which the WSA was built asserts that the earlier a young person is removed or distanced from the criminal justice system the less likely he or she is to re-offend.

The Scottish Government Whole System Approach for Children and Young people who offend (WSA) aims to significant reduce the use of custody and secure accommodation wherever it can do so, through the availability and use of services, and; to seek opportunities to engage these young people by establishing a more direct and consistent response that invites all systems and agencies to work together (a ‘whole system’ approach) to achieve better outcomes for young people and their communities.

As a result, the main aim of the WSA is to ensure that only those under 18 who really need formal measures – such as compulsory supervision by the Children’s Hearing System, prosecution, secure care or custody are taken through such process.

To achieve this aim, the WSA established three main policy strands to target the reduction of young offenders in the criminal justice process or system:

These three main policy strands have worked together to create a practitioner-friendly, user prioritising and cost-saving approach to youth offending that has been praised throughout Scotland by practitioners and users alike.

However, this case-study will focus on the strand of the WSA that is most innovative; the Pre-Screening Referrals.

The aim of the PRS in conception was to remove the youth from the view of the criminal justice system wholly. As a result, within the Pre-Referral screening, all offending behaviour is treated as a call for welfare concerns rather than a criminally substantive issue in its own right. All agencies involved in the Pre-Referral Screening meeting share information constantly to make sure that every practitioner involved is fully informed about the young person’s circumstances.

Essentially, PRS has facilitates better outcomes with regards to young offenders because – through information sharing – it provides a fuller picture of the causes and or context of offending behaviour. Thus, making it easier for other agencies such as Health, Education, employability etc. to offer their help.

When a case is identified as suitable for diversion, they are discussed at multi-agency meetings with a range of partners from health to employability to education to young people services. Each partner has the authority to access and share confidential client information, and also accept the responsibility to divert cases to their respective agencies. In the meetings they discuss:

As a practitioner described, before PRS, it was ‘only the Police and SCRA [Scottish Children’s Reporters Administration] that had all the information’, which made is harder for someone outside of criminal justice to be part of the solution or to keep an eye on the young person’s welfare. Thus, an offending behaviour was more likely to be seen as a criminal offence instead of a welfare issue, and a young offender was more likely to be subjected to the criminal justice process. With PRS, it is more likely for other agencies outside of police and SCRA to see that ‘there’s something not right going on’.

Another Innovative part of PRS is the versatility of possible outcomes. A range of outcomes are available to partner agencies; from police warning letters to diversion to community safety. However, it is also possible for young people to be allocated to more than one service. Thus, there is constant view of multi-agency working to help the young person. Such multi-agency has pleased practitioners as well as the young people that have gone through the system.

The WSA (with particular mention for PRS) has been heralded as an effective, efficient and successful approach, with significant reductions in referrals to SCRA to the tune of 83%, a 70% reduction in under-18s in custody and a 74% reduction in young people appearing in Court.

WSA has also been evaluated in three Scottish local authorities, each with significantly varied geographical, demographic and organisational backdrop. The evaluation was carried out by the University of Edinburgh and Glasgow. Their overall finding noted that while there is room for improvement, particularly in terms of flexibility in implementing WSA across local authority areas, the WSA has achieved many of its aims, and has been a galvanising factor in driving significant improvements in partnership working, and in particular information-sharing and shared learning across agencies. Further, the evaluation has found that practitioners expressed a clear commitment to the principles, goals and values of the WSA.